When I started my blog I needed to learn a lot. I basically started from scratch! Because I have autodidact ability I can pick it up somewhat fast. For whom that doesn’t know what autodidact ability is; It’s a compound word made from the roots auto- (Greek for self, same) and didactic ism (education, learning). … In other words, whenever you are teaching yourself something you’re considered a self-teacher, an autodidact. An autodidact is someone who critically and willingly seeks out knowledge and picks it up easy.  When I started on the ESP HomeKit Projects once again I needed to start bottom up. And this is where I was introduced to the Rubber Duck.

Rubber Duck Debugging: The Psychology of How it Works

Computers process information differently than humans do. Anyone who’s first learning to program understands this well. What’s hard about programming for a beginner isn’t really big hard esoteric concepts, but that you’ve got to be so painfully exacting in how you describe everything to a (dumb) computer. That’s why we do rubber duck debugging.

But to keep on my first thread, because it illustrates why rubber ducks (or inanimate objects, or pets, or speechless-children) can help you fix errors in code. After we explain that a bit more, we’ll get to making sure we know why “rubber duck debugging” is such a popular technique, and what that tells us about human psychology.

The Exactness of Computer (and Duck) Understanding 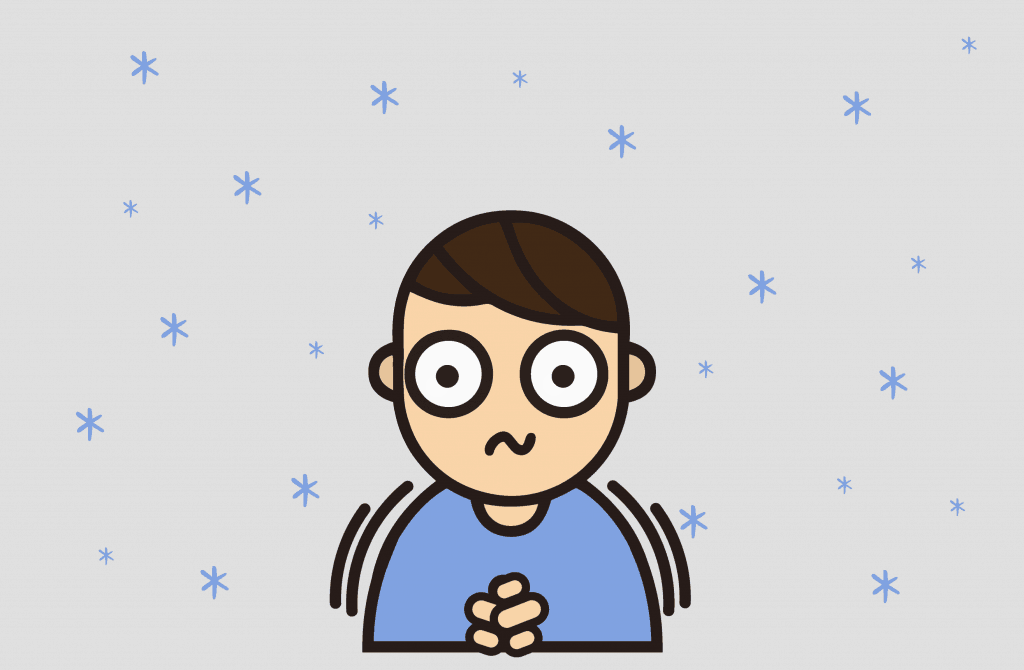 It looks cold here to this human.

“Is it cold outside?” is a question that most humans, having some idea of the weather, will answer pretty easily. They’ll say something like, “No, it’s pretty nice.” Asked that question, a computer — or a really finicky and hyper-rational person — will need you to define each of those words. To quickly illustrate, “cold” is the fuzziest of the bunch and can be answered relative to many standards. A few:

Without having one of those standards picked for it, most computers would have no idea how to answer the question of it being “cold.” Even if it knew with a high degree of certainty and precision that its was 11,6ºC outside, with a mild breeze and few clouds.

Why explain this so clearly. Because it drives home the point that most human logic is “fuzzy” and most computer logic is not. We need to use plastic-y duck-shaped toys when programming because human fuzziness is an issue for computers.

Why should you tell a duck about your programming problem?

Quite simply, we use ducks and other stand-in because of the vast difference between the way most humans think and the way that computers do. When you hit a roadblock when programming, it’s likely that you’re not thinking the way a computer does. Computers are painfully precise. Humans are, generally, forgiving and loose in their understanding. So many of the “bugs” and issues you have when solving a problem in your program originate in not being clear and explicit enough in your instructions.

This is where the concept of “rubber duck debugging” comes in. To be clear, the rubber-y and duck-y-ness of the object don’t matter, it’s just important that it’s not you. If you can imagine a figure, that works. Your dog or cat works, or other pet. Or your office chair, your drinking cup, what ever you want.

The important thing is that you explain your problem to this object of (one-sided) conversation. Follow the steps:

Your stuck while writing Code…

Explain the code to the rubber duck…

If you’re  likely to slow down and be more exacting than you are when you’re power-typing code. Most of us think way faster than we talk. So especially if you’re verbally explaining what’s going on to this other object, you’re likely to be a bit more careful and precise by virtue of that speed bump of saying it.

This effect is linked but distinct from the second shift, which is that you have to work from the knowledge that the rubber duck you’re explaining your code to doesn’t know as much about the problem as you do. It’s a milestone (of the concrete operations stage) in Piaget’s theory of cognitive development when a child learns that other people might have different understandings than they do. For anyone reading this, you almost certainly have this skill and don’t even realize you do. And it’s what’s making rubber duck debugging effective for you.

“Teaching” Your Rubber Duck to Code

When you’re assuming the ignorance of your rubber duck, you’re having to explain more thoroughly and exactly than you were likely thinking those specific lines of code through in your head. You’re forced, by the need to be precise while helping someone else understand your problem, to pay very careful attention to all that you were previously just taking for granted.

If you’ve possibly heard people recommend teaching as a great way to further your learning, it’s rooted in the very same shift. When you’re explaining, “and then this probably will happen because it usually does” feels pretty lame as an explanation. So you’re forced to understand more deeply and explain more fully.

It is precisely this that makes rubber duck debugging effective. The psychological shift outside of yourself, and into the rubber ducky, changes everything. Suddenly your perspective is different. Suddenly you think differently than you were in that rut of brokenness. And that’s super important. Onward, to bigger problems! Beyond the rubber duck

By explaining your program to a duck, you often magically find the flaw in your code. As an answer on StackExchange points out, where this technique really shines is when you’ve got a simple logical flaw that no amount of variable state checking will reveal to you. Because of the psychology of how we humans relate, you’re forced to think fresh when you invoke your little rubber ducky, and your problem may be quite simply solved. I hope it works for you! 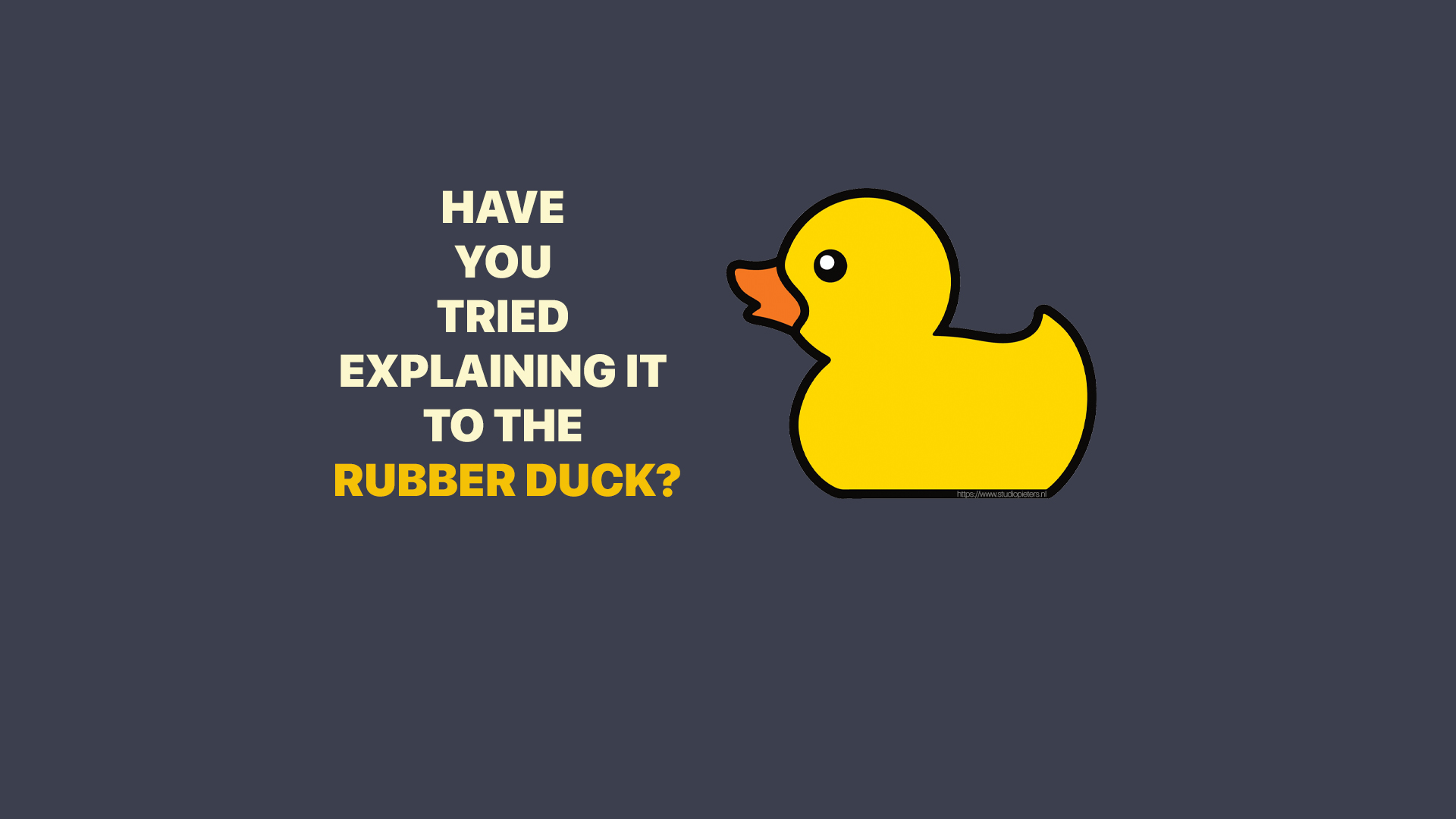 David B Hayes,  High-Level Concepts (2019), Rubber Duck Debugging: The Psychology of How it Works, https://www.thoughtfulcode.com/rubber-duck-debugging-psychology