In the past I used different Sensors like the DHT11, DHT22 and MQ135. Now for one of my ongoing projects I’m going to try the GP2Y1010AU0F – PM2.5 Optical Particle Sensor. Before we can use this sensor we need to have som background information, so we know how to use it.

The Health Council of the Netherlands: Government needs to do more for air quality. That writes the independent advisory body to the Cabinet Tuesday in an opinion. 23 January 2018 · The air is still not clean enough. There still die thousands of people in Netherlands early by particulates. The WHO (World Healt Orginasation) Speaks of  7 million deaths annually by dirty air. Also in many homes the air quality is not enough. That’s because of harmful particulate matter released by, among other things, baking and frying, burning candles or the fireplace. You can see how clean the Air is by looking at the AQI. The AQI is an index for reporting daily air quality. It tells you how clean or polluted your air is.

But For the Indoor Air Quality ther is a differt index called IAQ. The Indoor air quality (IAQ) is a term which refers to the air quality within and around buildings and structures, especially as it relates to the health and comfort of building occupants. IAQ can be affected by gases (including carbon monoxide, radon, volatile organic compounds), particulates, microbial contaminants (mold, bacteria), or any mass or energy stressor that can induce adverse health conditions. Source control, filtration and the use of ventilation to dilute contaminants are the primary methods for improving indoor air quality in most buildings. Residential units can further improve indoor air quality by routine cleaning of carpets and area rugs.

There are many ways to upgrade your air quality in your house. This can be simply done by plants (NASA – Clean Air Study), but more about this in another blog. First We have to see how the Quality of the Air in our house is at this moment. We can accoplish this by measuring the particlates in the air. Therfore I found a affortable sensor the Sharp GP2Y1010AU0F Sensor.

Sharp’s GP2Y1010AU0F is an optical air quality sensor, designed to sense dust particles indoor measurement of PM2.5 mass concentrations. An infrared emitting diode and a phototransistor are diagonally arranged into this device, to allow it to detect the reflected light of dust in air. 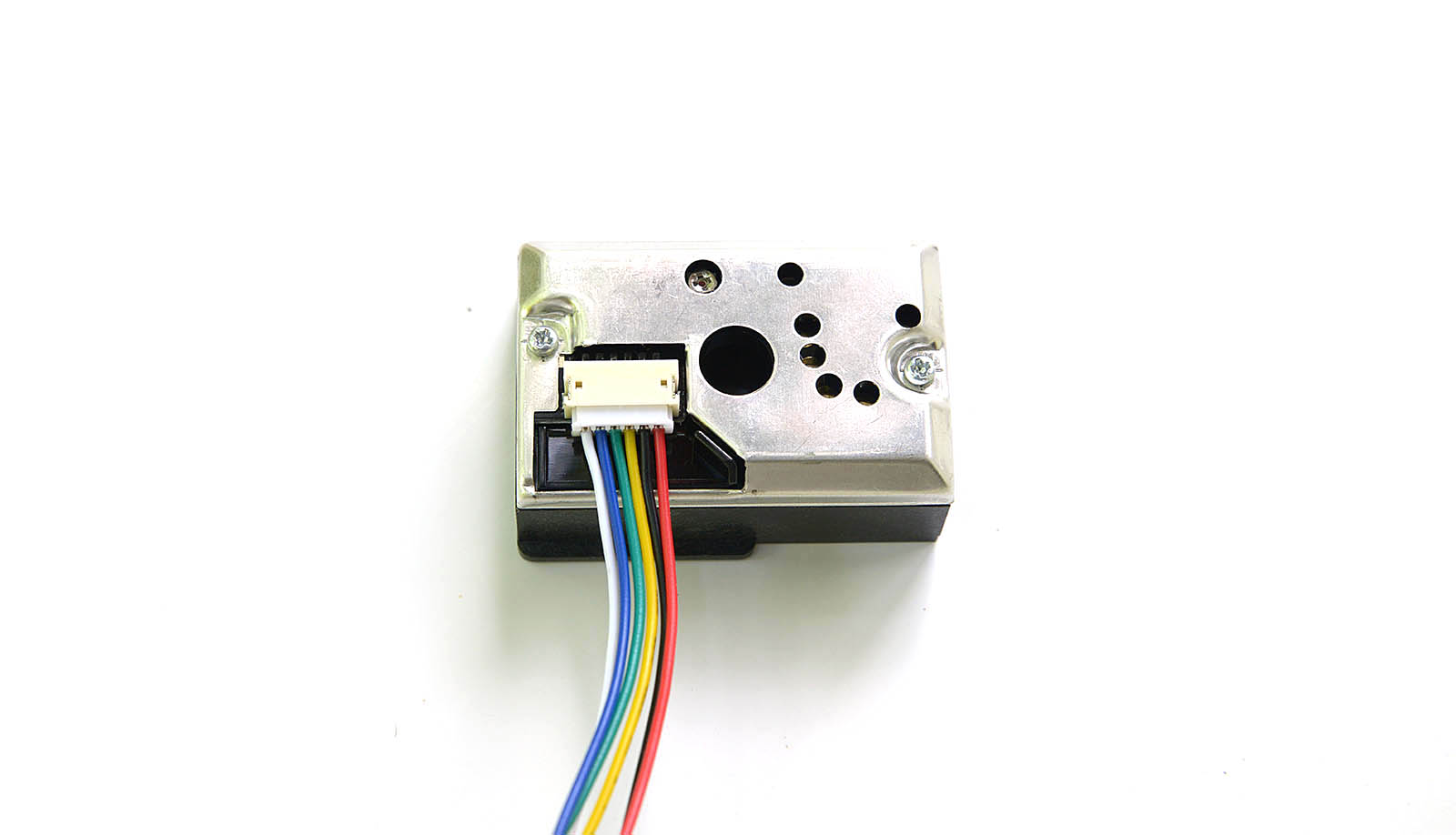 It is especially effective in detecting very fine particles like cigarette smoke, and is commonly used in air purifier systems. 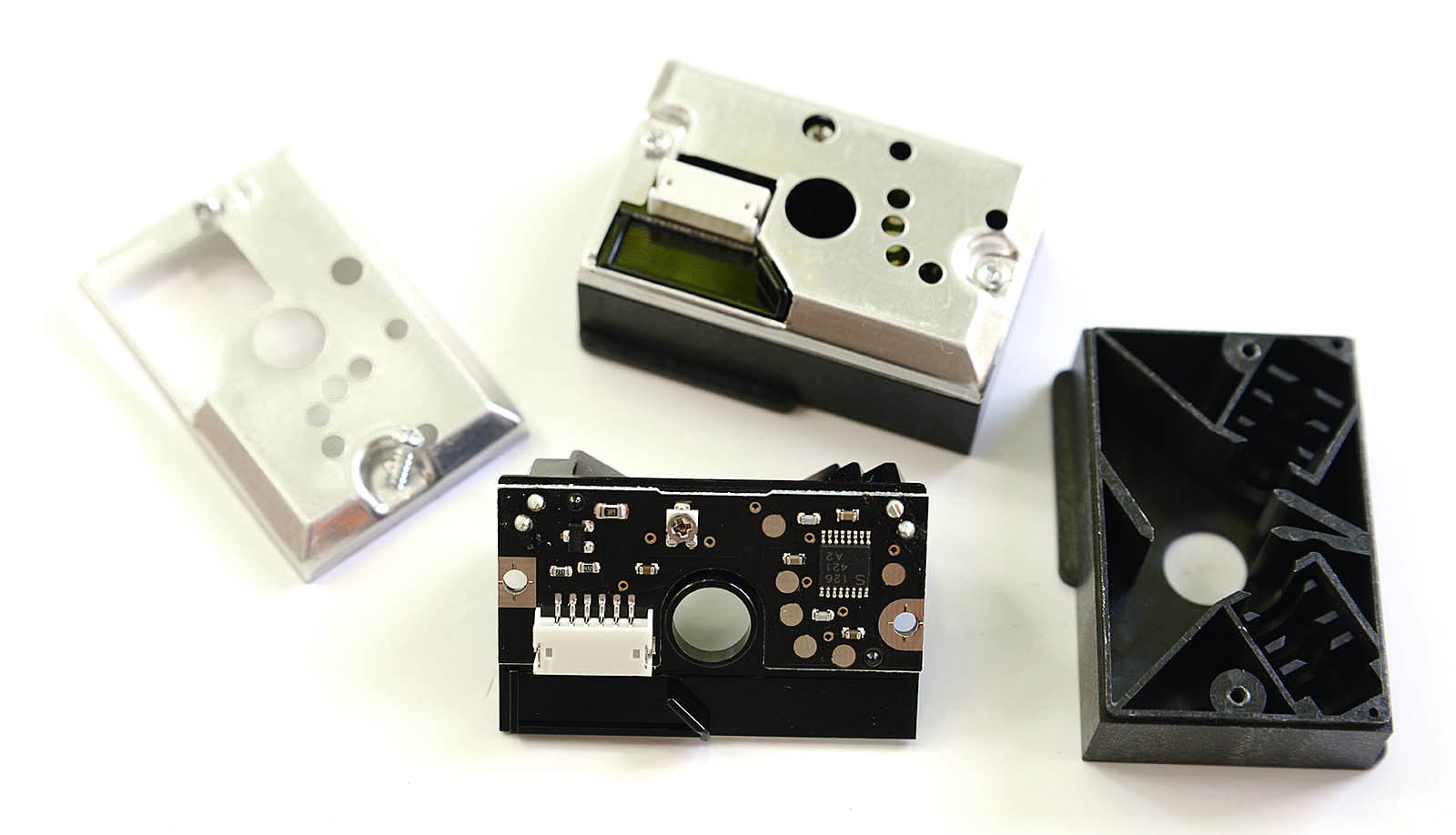 The sensor has a very low current consumption (20mA max, 11mA typical), and can be powered with up to 7VDC. The output of the sensor is an analog voltage proportional to the measured dust density, with a sensitivity of 0.5V/0.1mg/m3. 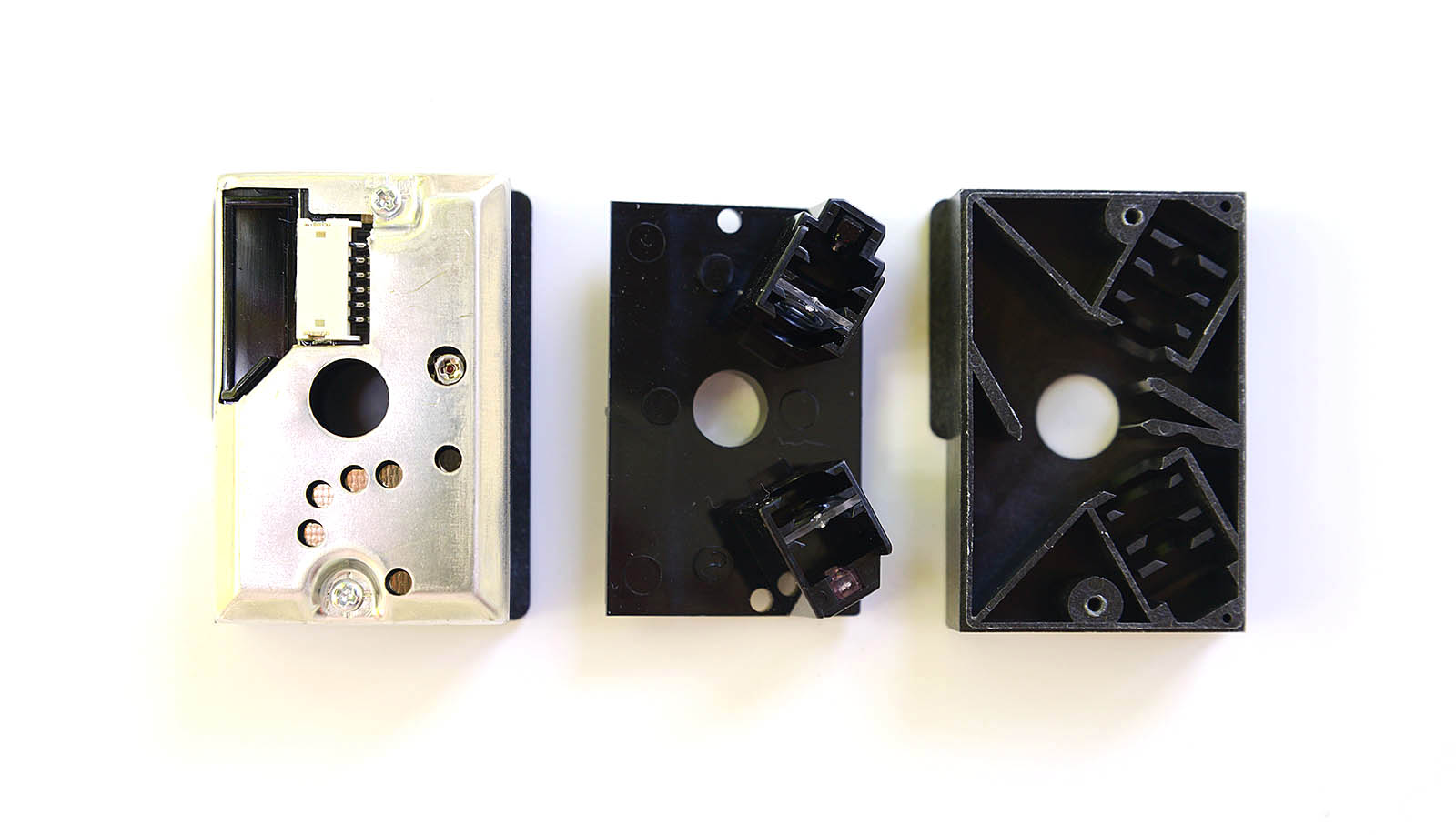 To interface with the sensor you need to connect to its 6-pin, 1.5mm pitch connector.

What is PM2.5 and Why You Should Care

PM2.5 readings are often included in air quality reports from environmental authorities and companies. Find out what they mean and why you should monitor their levels. PM2.5 refers to Atmospheric Particulate Matter (PM) that have a diameter of less than 2.5 micrometers, which is about 3% the diameter of a human hair. Commonly written as PM2.5, particles in this category are so small that they can only be detected with an electron microscope. They are even smaller than their counterparts PM10, which are particles that are 10 micrometres or less, and are also called fine particles.

Fine particles can come from various sources. They include power plants, motor vehicles, airplanes, residential wood burning, forest fires, agricultural burning, volcanic eruptions and dust storms. Some are emitted directly into the air, while others are formed when gases and particles interact with one another in the atmosphere. For instance, gaseous sulfur dioxide emitted from power plants reacts with oxygen and water droplets in the air to form sulfuric acid as a secondary particle.

Why Are PM2.5 Dangerous

Since they are so small and light, fine particles tend to stay longer in the air than heavier particles. This increases the chances of humans and animals inhaling them into the bodies. Owing to their minute size, particles smaller than 2.5 micrometers are able to bypass the nose and throat and penetrate deep into the lungs and some may even enter the circulatory system.

Studies have found a close link between exposure to fine particles and premature death from heart and lung disease. Fine particles are also known to trigger or worsen chronic disease such as asthma, heart attack, bronchitis and other respiratory problems.

A study published in the Journal of the American Medical Association suggests that long-term exposure to PM2.5 may lead to plaque deposits in arteries, causing vascular inflammation and a hardening of the arteries which can eventually lead to heart attack and stroke. Scientists in the study estimated that for every 10 micrograms per cubic meter (μg/m3) increase in fine particulate air pollution, there is an associated 4%, 6% and 8% increased risk of all-cause, cardiopulmonary and lung cancer mortality, respectively.

Because I always use the Fritzing app to illustrate the hardware setup of a new project, I need a new fritzing part for future setup’s. So after some designing in illustrator this is the end result.