In my previous blog ESP HomeKit SDK – Flash I showed you How to Use a ESP as a HomeKit device. Now there is a new version on the market. About In 2015 the ESP8266 took the embedded IoT world by storm. For less than a few bucks, you could get a programmable, WiFi-enabled microcontroller with just enough GPIO to wiggle some LEDs and monitor some sensors. I spent a good chunk of the year working with the chip — laying out a handful of boards, and mostly wrestling with the lightly-documented SDK (to put it nicely). Fortunately, a huge community sprang up around the chip, and some amazing tools and firmwares were created to support it, like ESP8266 Arduino and NodeMCU. Espressif — the semiconductor company behind the ESP8266 — is releasing a new Internet-capable microcontroller: the ESP WROOM 32.

The ESP32 doesn’t replace the ESP8266, but it does improve on it in every aspect. Not only does it have WiFi support, but it also features a Bluetooth 4.2 radio, making it even more versatile. The CPU is similar to the ESP8266 — it’s a 32-bit Xtensa(R) LX6, but the ESP32 has two cores! There’s also 128KB of ROM and 416KB SRAM, but Flash memory (for program and data storage) is still left up to an external chip (up to 64MB).

The ESP-WROOM-32 is a powerful universal WiFi-BT-BLE MCU module for a variety of applications, from low-power sensor networks to the most demanding tasks such as voice coding, music streaming and MP3 decoding. ESP8266 bringing WiFi to a small and cheap package, but also has enough processing power and enough pins to complete the small things and began a small revolution. 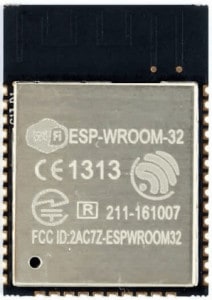 Now you can use the ESP-WROOM-32 WiFi / Bluetooth Classic / BLE module to elevate your WiFi capabilities to a higher level! The product is just a module – it could be hard to use. You need to solder it on a board with support circuit (see Espressif’s assembled ESP32 development board for a more complete design). This module is currently available for use by developers, FCC, CE, IC, MIC (Telec), KCC and NCC certifications.

So time to order one for some further investigation….