For an upcoming project I need and Arduino. Arduino is awesome. The boards are solid, the programming language and IDE are easy, and the community is awesome. But for a lot of electronics projects, an standard Arduino is overkill. If you’re just blinking a few LEDs, and reading a single sensor, you can get the job done smaller and cheaper using a simple IC, like the ATtiny85.

Unfortunately, the ATtiny85 doesn’t have a well-known, ubiquitous development platform like Arduino’s Uno or Leonardo. And 8kB of program space doesn’t leave much room for a bootloader, so an extra programmer is usually required. On top of that, standard Arduino doesn’t support the chip. That doesn’t mean programming the ATtiny85 in Arduino isn’t possible, though! 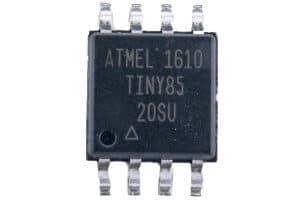